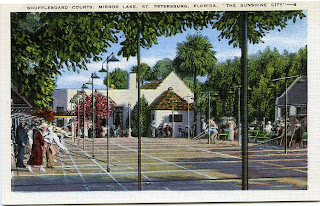 The National Trust for Historic Preservation is having a “This Place Matters” photo contest. After hundreds of entries, the selection has been narrowed down to just 12 entries which can now be voted on by the public. Among them, St. Petersburg’s own historic Shuffleboard Courts.

The Shuffleboard Club is significant for its association with the development of the tourist and leisure industries in St. Petersburg during the 1920s. The St. Petersburg Shuffleboard Club was the first organized club of its kind. It had thousands of members and served the recreational needs of St. Petersburg’s wintering tourists. Several tournaments were held on the grounds, including the first state tournament in 1928. In addition, the members organized a Festival of States Tournament and participated in the Festival of States Parade.
The club is located in the Mirror Lake area which at the turn of the century was known as Reservoir Lake and served as the source of the town’s drinking water. In 1910, much of the area around the lake was dedicated to “the public forever for the purposes of parks and roadways.” Some of the most important relics of architecture in the city including the Lawn Bowling Club, Coliseum, City Hall, Mirror Lake High School, and the Carnegie Mirror Lake Library remain around the lake. Plans for shuffleboard courts were revisited when, P.T. Ives of Meridien, Connecticut came to St. Petersburg in winter 1923. He urged the City of St. Petersburg to build two courts in Mirror Lake Park which it did in mid-1923 making it, along with Daytona, the only other city in the United States to play shuffleboard on land. (source City of St. Petersburg Urban Design and Historic Preservation)
If you agree that the St. Petersburg historic Shuffleboard Courts matter, cast your vote!