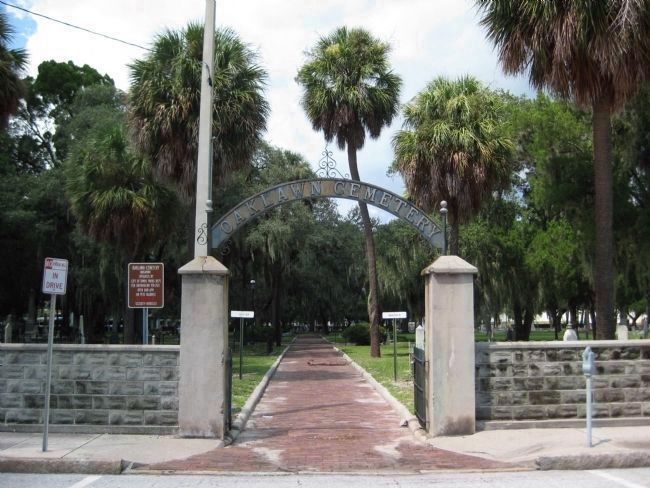 The Historic Preservation Commission of the City of Tampa today voted to recommend to the City Council that they vote to make Oak Lawn Cemetery a locally designated historic site within the City of Tampa. Dennis Fernandez prepared and presented a very well done PowerPoint presentation about the history of the cemetery. Thanks to Dennis and his staff for working so diligently on this very important site designation.

The Catholic Church had a representative present who indicated that the local Catholic Diocese was in favor of the designation and that they had a great interest in seeing the cemetery preserved and rehabilitated. I also expressed the interest of the Architectural Heritage Committee and AIA in seeing the cemetery, one of the true historical treasures of Tampa preserved.

Oaklawn Cemetery was created in 1850, when Tampa was a struggling town of around 500 persons.  In the minutes of the Alachua County Commissioners meeting, Oaklawn was designated as a public burying ground for “white and slave, rich and poor.”  Originally, most of the grave markers were wood (usually carved cypress), since stone for memorials necessitated an expensive combination of sail, steamship, and wagon transportation. Wood markers were destroyed by fire, rot, and storms, leaving many graves without durable markers.   Additionally, the original plat of the cemetery was misplaced after the Civil War, and the locations and identities of many early interments were lost.

At Oaklawn are buried many of Tampa’s pioneer families, thirteen mayors of the City, one Florida Governor, two Florida Supreme Court Justices, and the framers of five State Constitutions.  A portion of the cemetery was set aside for slaves and “marginal” persons (such as pirates), and public monies were designated to bury indigents. For more information on the cemetery and a self-guided tour go to http://www.tampagov.net/dept_parks_and_recreation/information_resources/cemeteries/files/Oaklawn_Tour.pdf.