Cabins at the Giant’s Camp in Gibsonton being relocated to Camp Bayou in Ruskin by the Ruskin Community Development Foundation. Two cabins will be moved to Camp Bayou, and one is being preserved on site by Mosaic. 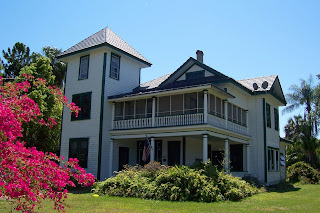 Dr. George McAnelly Miller is credited with the founding of Ruskin, Florida. Miller, a follower of the English writer and social critic John Ruskin, had previously founded colleges in Missouri and Illinois based on the belief that a college education should be available to the masses. These colleges provided agricultural or industrial jobs for students to assist with tuition and board costs, but required that even those who could afford the education work alongside those who could not. After a fire swept through the Ruskin College in Glen Ellyn, Illinois, Miller moved his wife and five children to Hillsborough County in search of a new campus in 1906. With considerable assistance from his brother-in-law, Albert Peter Dickman, Miller acquired land for his new Ruskin College in 1907. Altogether, Miller and Dickman purchased 13,000 acres between the Little Manatee River and Apollo Beach.

Miller’s wife, Adeline, established the first post office at Ruskin on August 7, 1908. The Ruskin Commongood Society platted Ruskin in 1910. Every person who bought a piece of Ruskin also bought a membership in the cooperative Ruskin Commongood Society. Nearly seven thousand acres sold within the first year. White men and women who bought land in Ruskin were prohibited from swearing, smoking cigarettes, and drinking. The Ruskin plat included the land for the college and two parks, which were owned in common by all members of the Ruskin Commongood Society, as was the cooperative general store. Ruskin was isolated in its early years; Tampa could only be reached by boat, and travelling to the Wimauma train depot could take a full day. Ruskin became largely self-sufficient, and even printed its own local community scrip to be used at the general store.

Ten percent of all land sales went to fund the new Ruskin College, which opened in 1910. Dr. Miller served as the college president, and Adeline Miller served as the vice-president. The college buildings were constructed of local lumber, as were the homes of the founding families. Ruskin College offered a liberal arts education. The college grew in popularity until the start of World War I, when most of the students left to enlist in the armed services or to support the wartime efforts by working in cities. Ruskin College closed in 1917, due to the lack of enrollment. In 1918, a fire destroyed all the buildings on campus except for the Arts Building. Dr. Miller died in 1919.

Ruskin grew slowly but steadily through the Land Boom years of the early 1920s. Ruskin continued as a strong agricultural community, weathering the Great Depression with its growing family farms. Paul Dickman, a son of A.P. Dickman, was a particularly prolific farmer and inventor of farm equipment. He is credited with innovations in tomato harvesting and packaging. In 1941, Paul Dickman became one of the founding members of the Ruskin Vegetable Corporation, a packing cooperative of Ruskin farmers, and the Ruskin Vegetable Distributors, a sales organization.

The annual springtime Ruskin Tomato Festival began in 1935. This agricultural fair celebrated the variety of crops that kept Ruskin a prosperous community, but it place due emphasis on the tomato, even crowning an annual Ruskin Tomato Queen. Today this festival has been revived as the Ruskin Tomato and Heritage Festival.
Despite the fire that destroyed most of the Ruskin College campus, several notable historic buildings remain in use in Ruskin. The 1914 George McA. Miller House is listed in the National Register of Historic Places. Adeline Miller designed the house, which is now owned by the Ruskin Woman’s Club, with influences from Swiss chalets and American bungalows. The 1910 A.P. Dickman House, a Hillsborough County Landmark, is a private residence.

The Ruskin Centennial celebration was kicked off on August 7, 2008, to commemorate the founding of the first post office. This day was marked with speakers at the Ruskin Woman’s Club and a tour of the National Register-listed building. The Ruskin Historical Society put together a self-guided walking tour of Ruskin’s historic buildings, including the Miller House, the A.P. Dickman House, and the L.L. Dickman House. From September 15 – October 11, 2008, Ruskin will be participating in The Big Draw, a month-long series of arts events to celebrate Ruskin’s history.

Information about Ruskin Centennial events, including a map of the Ruskin Historical Society’s walking tour, can be found online at http://www.ruskinhistory.org/.