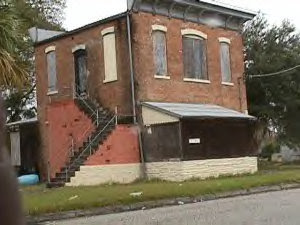 Port Tampa City, known earlier as Passage Point or Black Point, was established in 1893 at the end of a Henry Plant Railroad spur line. Early Port Tampa history revolved around the Plant System of railroads, hotels and steamships, serving as a steamship port to Cuba as well as home to several hotels. Absorbed by the City of Tampa in 1961, Port Tampa still has a small town atmosphere secluded from Tampa’s city life. The area retains much of its historic charm with brick streets, 1926 marble Port Tampa City Library, quaint churches and historic homes. In addition, the area capitalizes on its environmental assets with Tampa’s Greenways Trail and Picnic Island, featuring a beach, boat ramp, fishing pier, and bird sanctuary.
Within this setting is a threatened piece of architecture inherently tied with Port Tampa history known as the FitzGerald Building. The building was built by Captain James W. FitzGerald, a stockholder of the Peoples Line Steamers and Superintendent of Plant’s steamship line. FitzGerald was captain of the steamboat h. b. plant from 1880 to 1886. 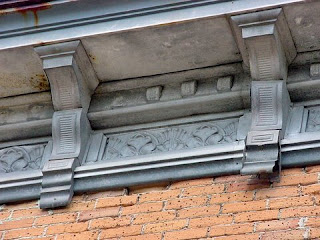 Captain FitzGerald arrived in the area that was to be Port Tampa City in 1885 and partnered with Charles W. Prescott of Erie, Pennsylvania. Together they purchased a section of land that they platted with the streets and blocks of the town, then chartered as Port Tampa City. Captain FitzGerald and Mr. Prescott, along with sea captain Henry G. “Harry” Warner, also formed the Port Tampa Building and Loan Association.According to City of Tampa property records, the FitzGerald Building was constructed in 1890. Approximately 1,300 sf, the brick building is two-stories high and has a pressed metal cornice. All indications are that it was built as the Captain’s place of business, although no official documentation has been found. The Sanborn Fire Insurance Co. map of 1899 depicted the footprint of the FitzGerald Building as it stands today.

Mrs. FitzGerald died in 1904, Captain FitzGerald died in 1909, and the heirs retained ownership of the property until 1944. Thus, the FitzGerald family owned this particular piece of land for 51 years. The building then went through a succession of owners who utilized the building for various commercial and residential uses. One owner, with plans for a nightclub, gutted the building interior, but never completed the remodeling. The current owners, Mr. and Mrs. Edward Devoe, purchased the Fitzgerald Building in 1976, to use for equipment storage for their contracting business. The building has been vacant since the Devoe’s retirement and is now in need of stabilization to prevent further deterioration.

A developer planned to purchase the property a couple of years ago, with intentions of demolishing the building; however due to the historic significance of the building, the demolition request was denied. The FitzGerald Building is the oldest surviving business structure in Port Tampa City and is worthy of preservation. The Devoes acknowledge the historic significance of the property and are supportive of the efforts to preserve the building; however, they are eager to sell the property. Local residents are working with the Devoes and community preservation groups to find ways to save this important historic Port Tampa building.