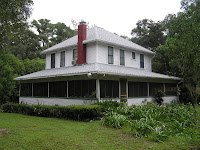 On July 22, 2008, the Board of County Commissioners designated the Knowles House, a two-story, symmetrical Frame Vernacular-style house, as a historic Landmark. The circa 1915 Knowles House was constructed from local heart pine timber by Robert H. Knowles. This house is clad in clapboard siding and is topped by a pyramidal hipped roof. A hipped roof also covers the screened main entrance porch, which wraps around the south and west sides of the building. Vernacular houses with square plans were commonly built with pyramidal roofs during the early decades of the 20th century. These roofs required more complex framing, but were less expensive to build since they needed fewer long-spanning rafters. Through the use of the heart pine timber and the incorporation of a sleeping porch and a wraparound porch in the design, the Knowles House exhibits construction materials and design adaptive to the Florida environment.

Robert’s father, Henry Marion Knowles, was appointed “Postmaster at Oaklawn, in the County of Hillsboro, State of Florida” by the Postmaster General of the United States of America on June 10, 1902. In 1908, the post office was renamed after the Knowles family. When Henry died in 1910, his son Robert H. Knowles, one of eight children, took over the Postmaster position. The Knowles post office closed on June 15, 1915, and the postal service was moved to the nearby Valrico post office. Knowles appeared on a 1917 map from Mawson’s Geographic Manual and New Atlas and on a 1920 U.S. Railroad Administration map.

The Knowles post office was one of many in Hillsborough County that is no longer extant. One of the earliest post offices in the County was the Alafia office, established in 1855. The Alafia community was initially settled through the Armed Occupation Act of 1842. Fort Alafia, a garrison and supply depot, was established in 1849, and the army constructed a crude road from Fort Alafia to Fort Brooke, contributing to the growth of the community. Fort Alafia was closed by 1859, but the community continued to grow, in part due to the lumber industry. The Alafia post office was discontinued and reestablished several times until 1920, the same year that Alafia’s Warnell Lumber and Veneering Company closed, and the mail finally was routed to Durant.

In eastern Hillsborough County, one of the most enduring communities has been Brandon. The Brandon post office was established in 1890, with Victoria M. Brandon as the first postmaster. It owes its success in part to its proximity to the railroad. Other communities along rail lines also prospered, at least for some period of time. The last part of the nineteenth century saw a boom in railroad construction in Florida, and with it, a population surge. Between 1880 and 1886, 1,200 miles of railroad track were laid in Florida. In 1880, Florida’s population of approximately 270,000 resided predominantly north of the Tampa Bay area. By 1890, the rail lines extended south of Charlotte Harbor and Jupiter Inlet.

In 1883, Henry B. Plant connected the South Florida Railroad from Lakeland to Port Tampa. Post offices at Mango, (est. 1880), Seffner (est. 1884), Sparkman (est. 1884), and Sydney (est. 1882) were located along this rail line. Mango and Seffner remain identifiable communities today. The Sydney office was renamed “Cork” in 1884, and its name was changed again to Dover in 1890. The 1891 plat of Dover centered on the rail corridor, and the community rapidly became known as a shipping hub for nearby farms.

Another community in eastern Hillsborough County to change its name early in its existence was Fish Hawk. The Fish Hawk post office was established in February 1902, with Sarah T. Boyett as the postmaster. Two months later, Fish Hawk was renamed after the postmaster’s husband, Thomas Boyett.

The Florida Central & Peninsular system completed its rail line from Plant City to Tampa in 1890. This line ran south of the South Florida Railroad, through the communities of Turkey Creek, Sidney, Valrico, Brandon, and Limona. Of these communities, Limona was the earliest with a post office, established 1878. The post offices at Sidney, Valrico, and Brandon were established in the same year that the Florida Central & Peninsular rail came through, and the Turkey Creek office was established two years later. Other communities in eastern Hillsborough County, like Keysville, Hopewell, Lillibridge, and Welcome, prospered along the rail lines built to serve the lumber, timber, and phosphate industries.

Communities large enough to require a post office also sprang up along the rivers, which provided a transportation network well before the arrival of the railroad. A post office was established at Peru, on the south bank of the Alafia River, in 1879. Peru experienced substantial growth when phosphates were discovered along the river and the Peruvian Phosphate Company built a plant on the north side of the river. However, river mining proved to be less lucrative than land mining of phosphate. The post office was shut in 1900, and the mail was routed through the Riverview office, which had been established in 1891. Riverview thrived, mainly because of the lack of a bridge across the Alafia River to Peru. A bridge was constructed in 1901, and by the 1920s Riverview had expanded to both sides of the river and consumed Peru. 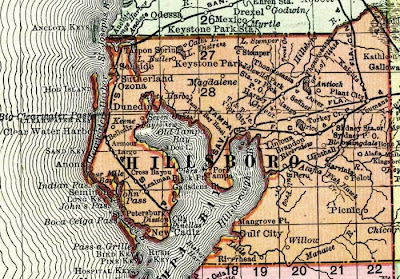