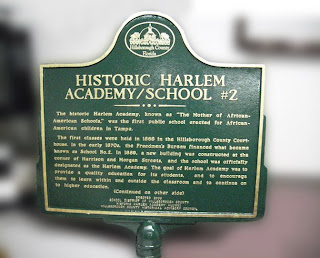 The first classes were held in 1868 in the Hillsborough County Courthouse. In the early 1870s, the Freedmen’s Bureau financed what became known as School No.2. In 1889, a new building was constructed at the comer of Harrison and Morgan Streets, and the school was officially designated as the Harlem Academy. The goal of Harlem Academy was to provide a quality education for its students, and to encourage them to learn within and outside the classroom and to continue on to higher education.

In 1892, Harlem Academy was destroyed in a fire. Thomas McKnight and other members of Tampa’s African-American community raised funds to rebuild the school. St. Paul AME and other churches provided space, until a new building was completed in 1895. This structure was replaced by a brick building in 1912. Many prominent African-American citizens were involved with the school. Christina A. Meacham and Andrew J. Ferrell, Jr., once principals of Harlem, had schools in Hillsborough County named in their honor.

The Harlem Academy closed in 1964, thus completing its ninety-six year contribution to the education of African-Americans in Tampa. Although the physical structure was later demolished, the heart of Harlem Academy lives on in the teachers, students and staff that graced its classrooms and halls.