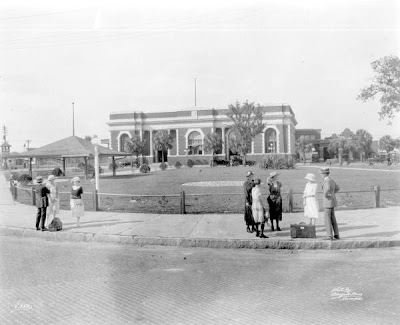 On May 9, 2009, the Friends co-hosted National Train Day at Tampa Union Station, an event which brought out over 1,200 people. The Tampa celebration was one of several large events held that day around the country to commemorate the 140th anniversary of the laying in 1869 of the Golden Spike at Promontory Summit, Utah, which completed America’s first transcontinental railroad.

Visitors to Tampa Union Station were treated to an Amtrak equipment display, exhibits from the Tampa Bay History Center, TBARTA, the City of Tampa’s Office of Historic Preservation and Urban Design, HART, Pinellas County Heritage Village, a Radio Disney remote broadcast, and the Tampa Bay Lightning Girls, among other features. Tampa Poet Laureate James Tokely was also on hand to do a dramatic reading of his poem, “The Epic of Tampa Union Station”.

Upcoming plans are exciting. In the near future, Friends of Tampa Union Station will launch a redesigned website at www.tampaunionstation.com which will include a detailed history of the station, will unveil a new logo, and hopes to start a “buy a brick” engraved donor brick program at the station. Preservationists of all ages are invited to participate!