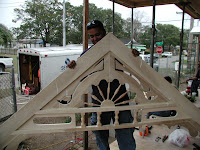 Historic preservation creates jobs. And not only creates jobs, but creates more jobs than new construction. These jobs are higher skilled jobs that pay better. And the jobs are local and can’t be outsourced as well.
When you build new, you assemble a myriad of components that were built with labor completed in factories throughout the world, reducing the amount of labor that has to take place on site. And because it takes less skill for a worker to install these pre-made pieces, such a window, the local jobs tend to be lower paid than an equal cost historic preservation renovation/ restoration project generates.
According to the National Trust for Historic Preservation website, “the reuse of older and historic buildings itself is a powerful tool for job creation and employment retention. Rehabilitation generally uses about 20 percent more labor and, in turn, produces a greater number of jobs than new construction. As compared to new construction, every $1 million spent to rehabilitate a building results in:

All this goes to show that preservation doesn’t cost–it pays.